Follow Alma Rivera as she learns to think for herself, make decisions and understand other people’s points of view. Watch Arthur and his friends creatively solve problems, learn to get along and appreciate each other’s differences! Explore science, engineering and math with the world's most curious monkey! Hacker wants to overthrow Motherboard and take over Cyberspace, but Motherboard enlists the help of three curious kids. Follow Daniel Tiger, his family and friends as they learn key skills for navigating school and life through catchy songs. Join Buddy and his adoptive Pteranodon family on a whimsical voyage through prehistoric jungles, swamps, volcanoes and oceans. Donkey Hodie and her pals empower kids to dream big, work hard and solve problems on their own. Elinor, the curious bunny, learns about science, nature and community through adventures with her friends. 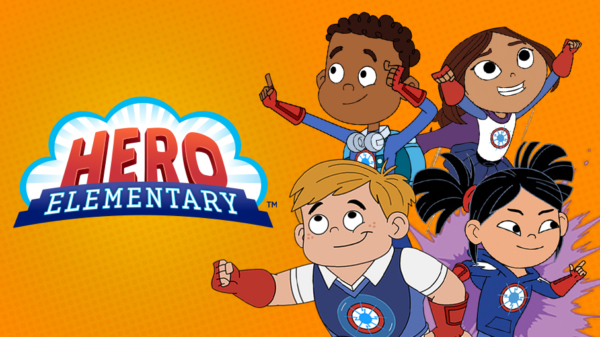 Hero Elementary is a superhero school, where kids learn to master their powers and explore science along the way! Follows the adventures of Leo, a wombat from Australia; Carmen, a butterfly from Mexico; and Andy, a frog from the U.S. Martha, the family dog, is accidentally fed alphabet soup, which gives her the power of speech to speak her mind. Join Molly, her dog Suki and friends Tooey and Trini on their adventures in epic, beautiful Alaska. Once his family leaves for the day, Fred transforms into Nature Cat: “backyard explorer extraordinaire!” Join a team of kid agents as they use math to face off against villains wreaking havoc. Follow the adorable, spirited Peg and her sidekick Cat as they embark on adventures and solve problems together. Pinkalicious and her younger brother Peter get into all kinds of artful adventures with their friends in Pinkville. Alien boy Jet Propulsion and his Earth friends explore the solar system and how it affects our planet. Since 1969, children and adults have flocked to the place where multiethnic, multigenerational and even multispecies residents coexist in harmony. Splash and Bubbles explore the world’s undersea habitats and learn about the many different ways life looks in the ocean. Join a team of fairytale superheroes who soar into storybooks and use their unique reading powers to solve preschool problems. Ruff, Blossom and Chet answer questions from kids, take on challenges and learn the value of failure. The Cat in the Hat

Explore the natural world, ask questions, make discoveries, create solutions and work together with The Cat in the Hat!

The Cat in the Hat The Kratt Brothers travel to different corners of the world to meet and learn about new animals and their habitats. WordGirl follows the everyday life and superhero adventures of “WordGirl” as she fights crime and enriches vocabulary usage. Xavier Riddle and the Secret Museum

Join pint-sized adventurers Xavier, Yadina and Brad as they unravel the secrets of world famous heroes from history.

Xavier Riddle and the Secret Museum

Join pint-sized adventurers Xavier, Yadina and Brad as they unravel the secrets of world famous heroes from history.